Revolve:R, edition four – which began in the Summer 2021 and is due in 2023 – is a collaboration between artists, poets, filmmakers, and musicians from England and around the world (including Mainland Europe, America, Russia, Australia, and Africa).

Revolve:R was initiated by Sam Treadaway and Ricarda Vidal in 2011 as a multidisciplinary and international collaboration. The project explores a transmission of ideas through collaborative forms of communication, from the physical and tactile to the digital and intangible, in which contemporary artists, poets, filmmakers, and musicians, produce original artworks, poetry, films, soundscapes and music in response to a series of artworks and the collective work.

Each Revolve:R edition is formed of six rounds, or Revolves (forming six chapters within the bookwork publications) which each follow the same pattern whereby a two-sided artwork is shared with invited artists who then respond with an artwork of their own by a specific date. The collective artworks of each Revolve are then shared with invited poets, filmmakers, and musicians. Thus the initial artwork sets in motion a multitude of alternative creative responses reflecting various ways of reading, interpreting and responding.

“…Picking up from where edition three left off Revolve:R, edition four holds a virtual litmus paper to the air and a finger to the pulse of the contemporary world to creatively explore some of the key issues of our times. With a central focus on the ever present Climate Change Emergency, against a backdrop of Global Pandemics and era of Lockdowns – via subjects including Artificial Intelligence, Modern-day Warfare, Cryptocurrencies, Race, Gender, Sexuality, and Activism – this collaborative and interdisciplinary work reflects on what it means to be human in an ever complex, uncertain, and chaotic world. The collective work of Revolve:R, edition four is thus intended to gently ask an open-ended question of its readers: If not now, when? If not you, who?…”

“A great collaborative project and new edition – we are happy to support edition four following the wonderful first three editions”.

“An exciting fourth edition of Revolve:R, that continues to create a valuable platform for the exploration of ideas, collaborative working and cultural exchange”.

Revolve:R, edition four can now be pre-ordered (with a saving of more than 75% RRP)

> The Revolve:R editions increase in value with the arrival of each new edition so this offer also represents a sound investment opportunity. Our pre-order campaign has been supported by some well known galleries and collections.

> Any orders for the first three Revolve:R editions (during the pre-order campaign) will receive a complimentary copy of Revolve:R, edition four.

> Please feel free to forward a link to the pre-order page to any contacts who would be interested to learn about the project and forthcoming edition.

Further information about the project can be found: here

If your gallery or archive dosn’t yet have an Artists’ Book collection the Revolve:R edition set is a really great way to start.

Thank-you in advance for your reading and perusal. We’ll be most pleased if you decide to order the Revolve:R edition set or pre-order a copy of Revolve:R, edition four. 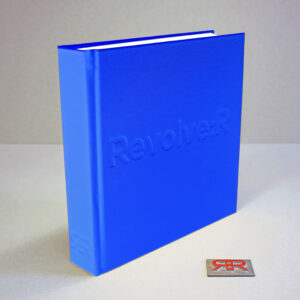